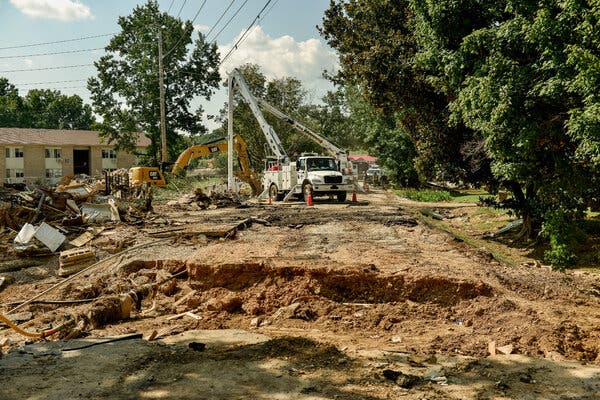 Waverly, Tenn. was devastated last week. The state’s central region, which was hit by flash flooding two weeks ago, is now preparing for additional flooding from Ida

Over the next few days, the remnants of Hurricane Ida are expected to bring severe weather to large areas of the United States (from Tennessee to Massachusetts).

At 11:11 Eastern Time on Tuesday, Ida was approximately 100 miles southwest from Nashville, moving northeast at 15 miles an hour through the Tennessee Valley. The storm was producing heavy rain and had maximum sustained winds of 30 m.p.h., according to the National Hurricane Center.

“The flooding threat is definitely not ended,” the National Weather Service in Nashville said. Please be vigilant.

Flash flood watches were in effect for parts of Middle Tennessee from Tuesday night. It was possible to get​​​​ up to six inches of rain. The center warned that flash flooding could occur if there is prolonged heavy rain.

According to the Weather Service, “A substantial amount of rain has fallen already and flood advisories are currently in place for parts of Middle Tennessee.” At least 21 people were killed this month when a catastrophic flash flood swept through a rural area west of Nashville.

Through Wednesday afternoon, the flash flood watch extended to the western edge of North Carolina.

The storm is moving northeast and Kentucky, West Virginia, the southern part of Ohio, West Virginia, large swathes of Virginia, and points up to Massachusetts are all under flash flood watch. Some areas in southern New England could receive up to four inches of rainfall, while others may see higher amounts. This is expected to happen from Wednesday through Thursday.

On Tuesday, there was also a risk of a few tornadoes in eastern Alabama, western Georgia and the Florida Panhandle. On Wednesday, the threat will shift to parts of the Mid Atlantic.

Radio Astronomy opened up new perspectives about the cosmos

Season 3 of “YOU” premiere in October , On Netflix